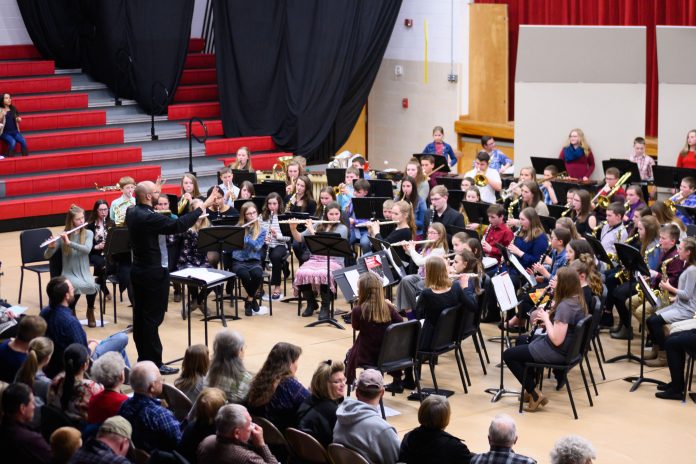 When Band Director Colin Zidlicky called on all members of the St. Ansgar Band to take the stage, grades 5 through 12, Ninety-three young musicians lugged their instruments to their places. The experienced high schoolers sat intermixed with the students that will one day take their place, and together combined for one last finale at Monday’s Band Bonanza Concert. On display was not only the group’s collective talent, but also the size of the combined bands.

An ode to American Music, the show started with the National Anthem and went on to feature music made by Americans or composed in The Untied States.

The middle schoolers played some selections of Antonín Dvořák, a famed Czech composer who spent the summer of 1893 in Spillville, Iowa, and wrote a few of his famous pieces during that time.

The jazz band was fresh off district competition, where they placed 3rd, and played some of their selections at Monday’s concert. The band played well, especially since it has been several years since St. Ansgar has competed with their jazz band at such a level.

Each grade/group has their own little nickname, which the students chose themselves. The sixth grade group, for example, chose the “Savage Saints” as their monicker. Zidlicky joked that the name wasn’t a reflection of their behavior in class, but rather of their dogged determination and the spirit in which they go after their goals.

Much like everything else, the bands were limited on practice time due to snow days, but were still able to muster a fantistic little showing of the school’s talent.

The road less traveled: Nelson the weatherman’s journey into the unknown

MCRHC looks to keep college students safe from a distance