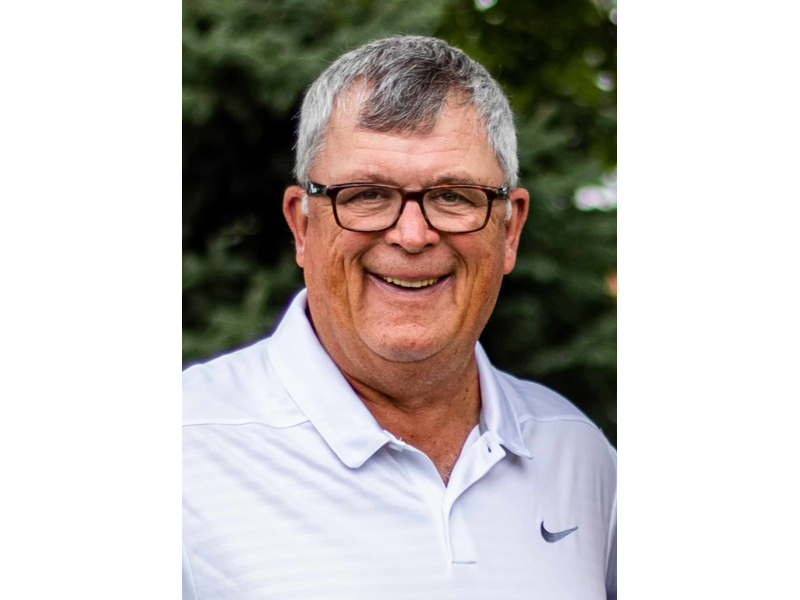 Funeral services will be held at 10:00 a.m. Tuesday, July 6, 2021, at Our Savior’s Lutheran Church in Osage with Rev. Cindy S. Krause officiating. Burial will be in the Osage Cemetery. Visitation will be from 4:00 to 7:00 p.m. Monday at the church.

He was born on July 19, 1952 to Melvin and Dorothy Peter from Story City, Iowa. He and his sisters, Jerilyn and Doretta, grew up on a farm.  Cal developed his love of golf by hitting golf balls in their pasture.

Cal went to Story City Community Schools and graduated from Roland Story in 1970 after they consolidated his senior year.Cal then went to Iowa State University to get a bachelor’s degree in mathematics.  He married Connie Strum on February 24, 1973 and then finished his degree.  Cal and Connie had two children, Melissa and Ben.

Cal taught math, coached wrestling and softball, and had some administrative duties at Melcher-Dallas for six years.  He then moved to Osage in 1981 to teach high school math, coach middle school girls track, and varsity softball.  He especially loved teaching the quadratic formula!  He loved the game of softball and even coached his daughter, Melissa, during her high school career.  He taught at Osage High School for 28 years, coached softball for 23 years, and compiled a career record of 463 wins and 310 losses.

Cal and Connie enjoyed going to sporting events and especially, they supported Melissa and Ben in their high school and college careers.   They also loved to take Ben and Melissa camping in the summer after the softball season was over.  Their trips had to include four things: a zoo; an amusement park; a brewery; and a major league ballpark.

Cal was a long-time member of Our Savior’s Lutheran Church where he served on many boards and was president at one point.  He had a strong faith in his savior, Jesus Christ.

Connie died of cancer on May 8, 2006.  Cal knew that he couldn’t function very well on his own, so he did a lot of sweet talking and married Donalyn Woeste, one of his former softball assistants and fellow teacher, on July 14, 2007.

Cal and Donalyn enjoyed traveling to Costa Rica, Nova Scotia, Alaska, touring around the United States, and they also enjoyed cruises.  But their main passion was going on baseball trips.  They went to all 30 Major League Baseball parks as they met other baseball enthusiasts. Cal’s main team was the Minnesota Twins where he was an avid fan and faithful supporter, even during this year when they weren’t doing very well. He spent many nights watching them and yelling at the T.V.

Cal also enjoyed the game of golf and he would play as much as he could each summer.  He also went to as many sporting events as he could for his five granddaughters.  He went to many soccer, volleyball, track, and their basketball games, but his favorite was going to their softball games and to his son, Ben’s, PEM varsity games. At the granddaughter’s activities, he took every opportunity to tell a story, do a little coaching on the side, or sharing one of his mints with them.

Cal is preceded in death by his parents, Melvin and Dorothy Peter, and his first wife, Connie.  He is survived by his wife, Donalyn, his daughter Melissa (Andy) Curry, daughters Kenna and Josie from Elk Point, South Dakota, and his son Ben (Jen) Peter, daughters Kaylee, Karly, and Khloe from Plainview, Minnesota.  He is also survived by his two sisters, Jerilyn (Terry) Rasmusson from Story City, Iowa, Doretta (Don) Hoffmann from Story City, Iowa, aunts, uncles, and several nieces and nephews.