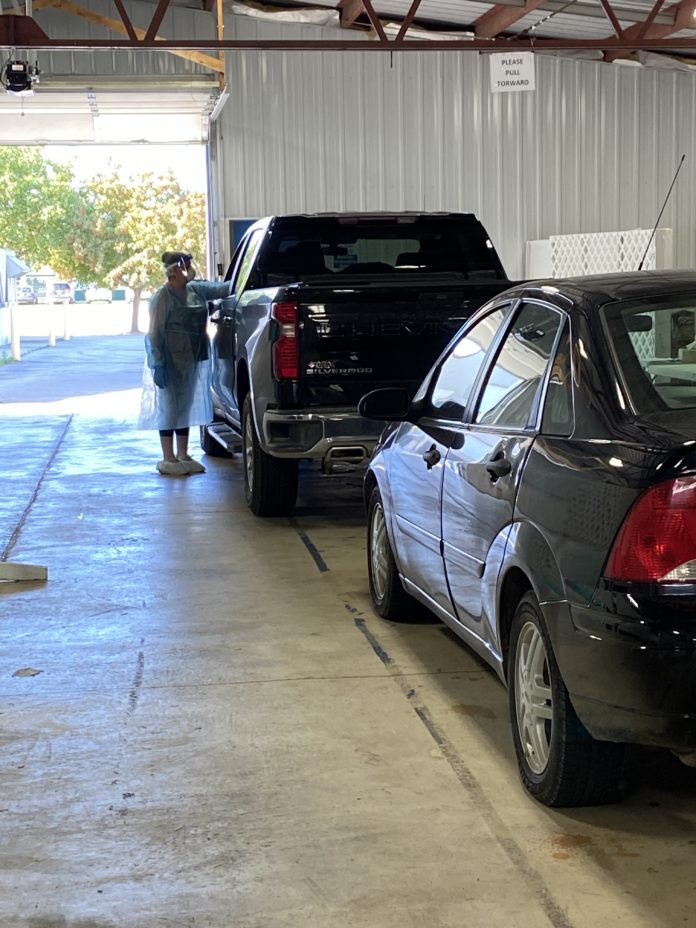 In an interview with Mitchell County Public Health, officials Laura Huisman and Jessa Ketelson reported that Mitchell County’s Test Iowa drivethrough site has been running without a hitch.

She reported that the scanner that Governor Kim Reynolds promised at her June 16 visit to the site arrived the next day, and that personal protective equipment (PPE) supply drops have been steady.

Despite the site’s successful operation, there are rumors circulating about Test Iowa that are false, Huisman said. The Test Iowa officials want to make sure that the public understands the process behind the testing.

For starters, one can’t just drive up to the site and be tested. “People who suspect they have coronavirus have to make an appointment,” said Huisman. “They can do that at testiowa.com, where they will be asked to fill out a quick assessment online. From there, you need to find our clinic and get your unique ID.”

After that, the patient should call the clinic to make an appointment at the drive-through, which is open Monday through Friday for various hours. The site doesn’t have a maximum amount of tests it will administer in a day, and can test people of any age.

Test Iowa only administers nasopharyngeal tests which, contrary to the supposed belief of some, do not cause any harm more than some general discomfort, said Ketelson.

The nasal swabs are shuttled to the state hygienic laboratory in Coralville at the end of every day. The public health officials said that, while patients are told that it may take two to four days to get results back, they typically come back in about 36 hours.

The state hygienic lab is running seven days a week so that people can see their results the following night. One of the biggest rumors to be debunked, Huisman and Ketelson said, is that a person who tests positive for the virus and comes back to test again will be reported as a second positive case to the state.

The health officials stated that the data testing sites collect prevents duplicate reporting, even if the individual tests positive at two different facilities. Huisman said that, since the Test Iowa site is free to any Iowan, there are people regularly coming through to get tested “just because.”

Contract tracing is important in prevent the spread of COVID-19, Huisman and Ketelson said.

“If anyone is defined as a close contact, regardless of if they are currently testing negative, if they’re a close contact of someone who tests positive for the virus, they should quarantine for two weeks away from other people and animals,” said Ketelsen.

The public health officials said that there is confusion surrounding how long a person will test positive, even after their symptoms have disappeared. They need to meet the 3 guidelines from public health which is: 10 days since the onset of symptoms, if no symptoms then 10 days from when tested, 24 hours fever free and symptoms must have improved, in order to be released off of isolation.

They noted that there have been patients who can’t return to work until they can produce a negative test— but it could be weeks or even up to a month, since their first positive. While public health officials have little say over when an employer will let a person who has COVID-19 return to work, Ketelsen said studies have shown if they have met the guidance put out by public health they feel that these individuals are not actively shedding the virus, however should continue to take precautions like physical distancing, wearing a mask and practicing good hand hygiene.

Huisman said that the site is currently administering about 90 tests a day, with the total number of tests administered since the site opened approaching 2,000. Questions about the Test Iowa site should be directed to the Mitchell County Department of Public Health at 641-832-3500.

Putting a story on the plate: the impacts of ProStart in Mitchell County

After half a century, Gordy’s Repair and Implement keeps on