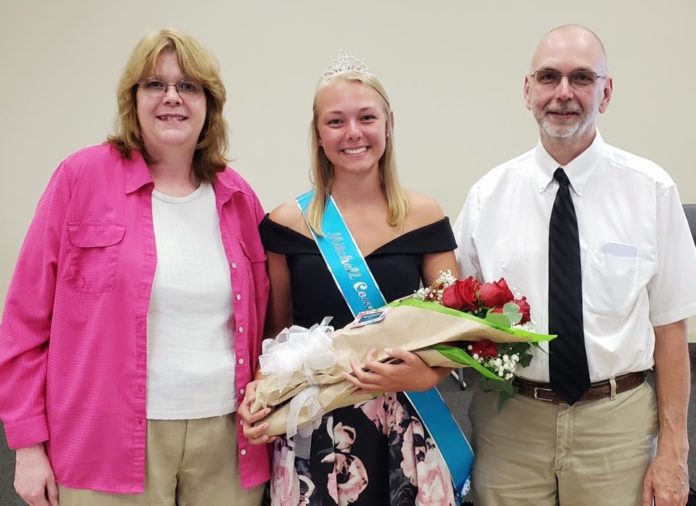 Phelps, the daughter of Kirk and Linda, won the fair queen title, beating out three other contestants from Mitchell County.

“Being Fair Queen was something I always dreamed about as a little girl so to finally have that dream was a great feeling,” Phelps said.

Phelps said she would encourage girls who are interested in participating to do so.

“I’d tell them to go for it because my experience so far has been amazing,” she said, “I’d just tell them to be themselves through the whole contest.

Phelps will go on to compete at the state level next, along with the Queens from every other county in Iowa.

“I’m really excited to represent my county at the state compeition and see where it takes me.”

Phelps, who graduated in May, plans to attend Iowa State University for animal science. While in high school, she participated in diverse extracurricular activities, such as choir, drama, speech, and FFA, as well as being on the track and cross country teams. She was also a member of the National Honor Society.

The other contestants included Carissa Blake, of Grafton, Maddie Wagner, and Katelynn Mostek, both of Osage. Mostek was awarded runner up and Blake received the Miss Personality Plus award.

Little Mr. and Little Miss Mitchell County were also crowned, with Spencer Johanns of Osage and Nora Balsley of Mitchell winning the the two titles, respectively. 35 kids entered this year, a near record for the competition. Brynlee Kleckner and Elise Peterson were the first and second runner ups in the Little Miss category, while Chase Eastman and Maxwell Malmin won first and second runner up in the Little Mr. category.