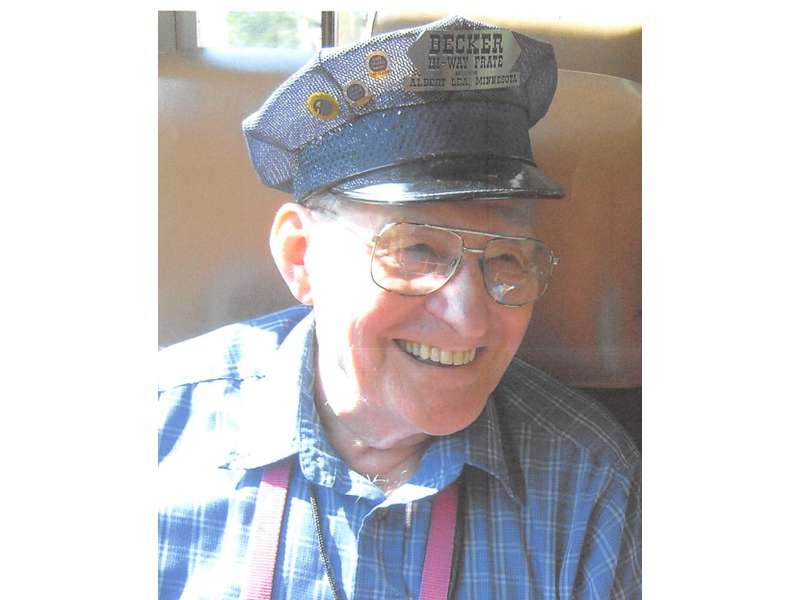 Joseph (Joe) Becker was born in a farmhouse near Blue Earth, Minnesota. Joe was the fourth of six children born to Ambrose and Alma Becker, whom made their living by farming.

Joe’s formal education began in a one room school for the first eight grades. At the age of sixteen, a disastrous crop failure forced Joe to seek another way of life to earn a living.

World War II was in full swing, and manpower was in short supply. No one asked for age, or license as long as the job got done. Joe started working for W.C. Tilbury of Delavan, Minnesota at the age of 16. A lot of truck driving was required, hauling to local markets. Several years were spent driving for Gamble-Robinson of Albert Lea, and Farmers Union of Mankato, Minnesota.

January of 1964 saw the beginning of Becker HI-Way Frate. Joe and family built the one truck operation into a fleet of trucks, that served 1000 customers in 38 states. Joe continued driving while operating his own repair shop; for the company trucks, five full time mechanics, under Joe’s supervision got the job done. When the Vocational School was established, Joe was asked to become a member of the advisory board for the diesel mechanics classes. Some years later he Chairman of the Board, and soon became an Evaluator for the State of Minnesota, Department of Education; for the Diesel Mechanics courses, at the various State Vocational Schools.

Seeing the need for more formal education Joe through the years took many training courses to further his own education; among some, Train the Trainer, Commercial Motor Vehicle Safety Inspector, Refrigerant Recovery & Recycling, Department of Transportation Safety Course, Installation and Maintenance of Air Brake Systems to name a few.

The first drivers hired for Becker HI-Way Frate, were hand picked and trained by Joe for six-month period of time. These drivers remained with the company for several years, and never were involved in a reportable accident. The success of this program became the basis for the Becker Driver Training Program that followed. The Efficiency part of this program has been copy righted. This program was co-sponsored by the Albert Lea Technical College in 1990. The school, and Joe were licensed by the State of Minnesota in 1991, with the blessing of the Minnesota Department of Education.

Safety in the workplace and safety on the highway, sharing the road with others has always been the forefront of any Becker training. The results have been recognized by the Insurance Industry as well as Department of Transportation. Many coveted plaques covering years of safety in the workplace, highway safety have been received. Some Becker drivers hold 40 plus years of safe driving awards. Joe himself, holds 60 plus year, and enviable record.

A special Thank you to all former employees, and students of the driver training school, for all the kind words of sympathy, and encouragement at this difficult period of time.

The family wishes to acknowledge for the following special doctors/nurses who made our caring for dad easier. Nurse Kirstin Meyer, and Dr. Michael Ulrick who helped Joe’s greatest need. Dr. Mina Hanna, and those nurses of the Oncology Dept. Dr. Sanders, and all those of the Wound Center, Hospice nurses: Stacy, Erin, and our late-night guardian angel: Rachael.

Included in his list of family members are the neighbor kids, classmates, and friends that adopted Joe, and Mary Ann as their own; especially Angie (Teddy) Keniksman; who they considered to be their daughter.